Favourably positioned just off the Super Highway in one of the city’s current growth hotspots, dcondo sign feels like a haven of calm amid the hubbub of the surrounding area yet is only a 200m stroll from Central Festival, reputedly Northern Thailand’s largest shopping mall, and to which it’s connected directly by a gated walkway with right of access restricted to its residents and those of dcondo nim. With no less than 300 shops and restaurants including Central Food Hall (claimed as the finest supermarket in all of Asia), two food courts, a weekly night market, a high-tech movie theatre with IMAX 3D/4DX, an ice-skating rink and, ideal for those who lack their own transport, free shuttle buses which serve four routes daily from CentralFestival to designated locations throughout Nimman, the ‘Old City’, Chiang Mai Airport and the Night Bazaar. Hardly any less reachable, Chiang Mai’s main (‘Provincial Arcade’) bus station can be walked from dcondo sign in roughly 15 minutes as can the well-trodden Chiang Mai Business Park (CBP), home to Big C Extra hypermarket, DIY store HomePro, furniture retailer Index Living Mall and the upcoming Platinum Fashion Mall. A mere ten minutes farther by foot is Bangkok Hospital, the city’s most recent infirmary and regarded by many local Thais and foreign expats alike as the leading private medical centre in Chiang Mai.

True to such a proven brand as Sansiri, on-site amenities and recreational facilities at dcondo sign are predictably excellent. Assorted security measures exist throughout the property providing residents comfort of mind thanks to 24 hour –and especially vigilant- uniformed guards at the barriered main entrance along with the incidence of video surveillance in all common areas, keycard-controlled access to the condo from the outside world and, courtesy of the ’Floor-Lock’ lift (elevator) system, entry only to pre-authorised levels of the respective building; for extra reassurance, residents benefit from a juristic office which is staffed at all times of the day and night. Together with a total of 251 car parking bays on the premises, each of dcondo sign’s four separate 8-storey residential buildings (specified as Towers A, B, C and D) incorporate a laundry room equipped with coin-operated, self-service washing machine and water-vending dispenser; adjacent to which is a high-ceilinged communal lobby, each of the four individually –and beautifully- appointed with a matching pair of three-seat scatter-cushioned wood and rattan couches, glass coffee table, standard lamps and foliage-adorned ornamental stone planters. Complimentary WiFi is available in all shared areas of the condo and, if required, residents can self-arrange installation of private home broadband through either of 3BB or AIS Internet Service Providers (albeit at their own expense).

Standing on a plot of approximately 11 rai (1.76 hectares), dcondo sign’s four Towers are collectively constructed in a rectangular formation; within which –and inspired by Chiang Mai’s “magnificent waterfalls, mist-covered mountains and lush year-round greenery”- is a meticulously kept landscaped courtyard filled with a medley of native trees and shrubs in a suitably tranquil setting. At the very heart of the inner sanctum lies the clubhouse with its showpiece –and Olympically proportioned- swimming pool while around the water’s edge are no less than four open-sided pavilions complete with an assemblage  of elegantly simple rattan furniture for lounging poolside. Though surprisingly unexceptional in size given the scale of the condo, the gym situated above the juristic office is at least crammed with all manner of up-to-the-minute fitness apparatus.

Fitted with a three-way digital door lock as an added safety precaution, the bulk of the 813 units in dcondo sign come completely furnished and fully air-conditioned. Boasting large windows, interiors are bright and airy with laminate/tiled flooring and smart contemporary décor rich in Earth tones. Most commonly represented are studio units and, ranging in size from 30.47 to 31.16 sq m, feature an open-plan living/dining layout with sliding glass doors to segregate the sleeping environment, separate kitchen and bathroom as well as a cosy private balcony. In contrast, 2 bedroom, 2 bathroom units are double the size at 60.98 to 61.49 sq m and offer combined living/dining/kitchen space and roomier private terrace. As standard, units are supplied with fridge/freezer and microwave appliances though an electric hob is noticeably absent. Bathrooms contain a glass-panelled shower cubicle with a chrome rainforest shower head and ceramic basin. The living/dining area includes a dining table and either two or four chairs, a two- or three-seat comfortable sofa and at least one flat-screen TV. Bedrooms include a queen sized bed (or king sized in the master bedroom of 2 bedroom units) as well as ample storage capacity.

Since officially opening its doors a little over a year ago, every single one of the original units at dcondo sign has been sold with now mostly private and holiday rentals appearing on the market. Although non-Thai residents clearly dominate domestic folk in number, the condo is something of a melting pot among foreigners with a diverse community of ages and nationalities in evidence.

Are you currently living at dcondo sign or have ever lived there? If so, we’d absolutely love to hear what you think by leaving a comment below!

1 bed condo at Dcondo Sign next to Central Festival Rent a condo at Dcondo Sign and use the biggest and best swimming pool in Chiang Mai!

Dcondo Sign 1 bed condo to rent next to Central Festival

Rent a modern condo next to Central Festival Chiang Mai

Definitely the largest swimming pool of all D condos. Both children and adults can enjoy swimming all day.

There is no charge for the pool. It's included in the common area fee already paid by residents.

The fitness room is above the pool where you can enjoy the view while you're working out, what a perfect combination!

Yes, the gym is free for residents of D condo Sign the same as the swimming pool

No need to worry about the security here. All the guards do well with their job. They always walk around the building and parking lots to make sure there is nothing wrong with the building and cars

Officially D condo Sign does not allow rentals in the condo for less than 30 days as per the government regulations. But as you may know some people still do it anyway

Since the condo is located next to the Central Festival mall, there is a bus stop and taxi pick up-drop off spot in front of the mall. Across the road by feet, you will see a bus station where you can also take buses to other towns as well.

Is Dcondo Sign located near shops and coffee shops?

If you walk outside of the building, you will see a 7-11, cute coffee shop, a bar & restaurant where you can enjoy your evening with family or friends

Are there shops in the Dcondo Signbuilding?

There is no shops in the building. You have to walk out to the driveway to get to the 7-11. But if you want to get some groceries then you will need to walk to the Central Festival mall by the condos walkway which is connected to the mall

D condo Sign has more than enough parking spots. Both under the building spots and outside are first come-first serve parking

What is the closest shopping center to Dcondo Sign?

Of course Central Festival is the closest one that's next to your door but if you would like to go to a supermarket then you can drive to Big C in Chiang Mai Business Park, only 2 minutes away. Also a cross the road, there is the Star Avenue shopping mall where you can enjoy many restaurants and shops

Is the foreign quota full currently full in Dcondo Sign?

Even it's popular for foreigners, there is currently space in the foreign quota, but we highly recommend double checking before signing any sales and purchase agreements as this can change fast.

The Common are at Dcondo Sign is 45 Baht a square meter.

Can I pay my electric and/or water bills to the Dcondo Sign management office?

Yes, you can pay your electricity and water bills at the juristic office though a small service fee for electric bills maybe charged.

No. However, the juristic office at Dcondo Sign can recommend and give you a contact of cleanners

Is there a luandry service or coin operated washing machines available in Dcondo Sign?

Well, I am not a big fan of these large scale condos but there is no denying that the grounds and facilities in this complex are great. Boasting the largest pool of any condo in Chiang Mai it is certainly impressive.

The facilities on offer at DSign mean that it is extremely popular. That along with it's easy walking access to Central Festival and growing community in the area around the Sansiri condo means the that for both buyers and renters it is a popular choice

Have a look at our walk through video at Dcondo Sign 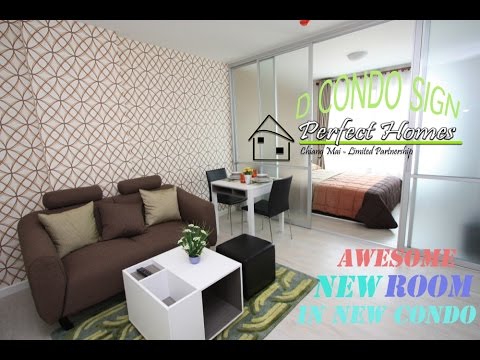 Have a look at our video at Dcondo Sign with Luna 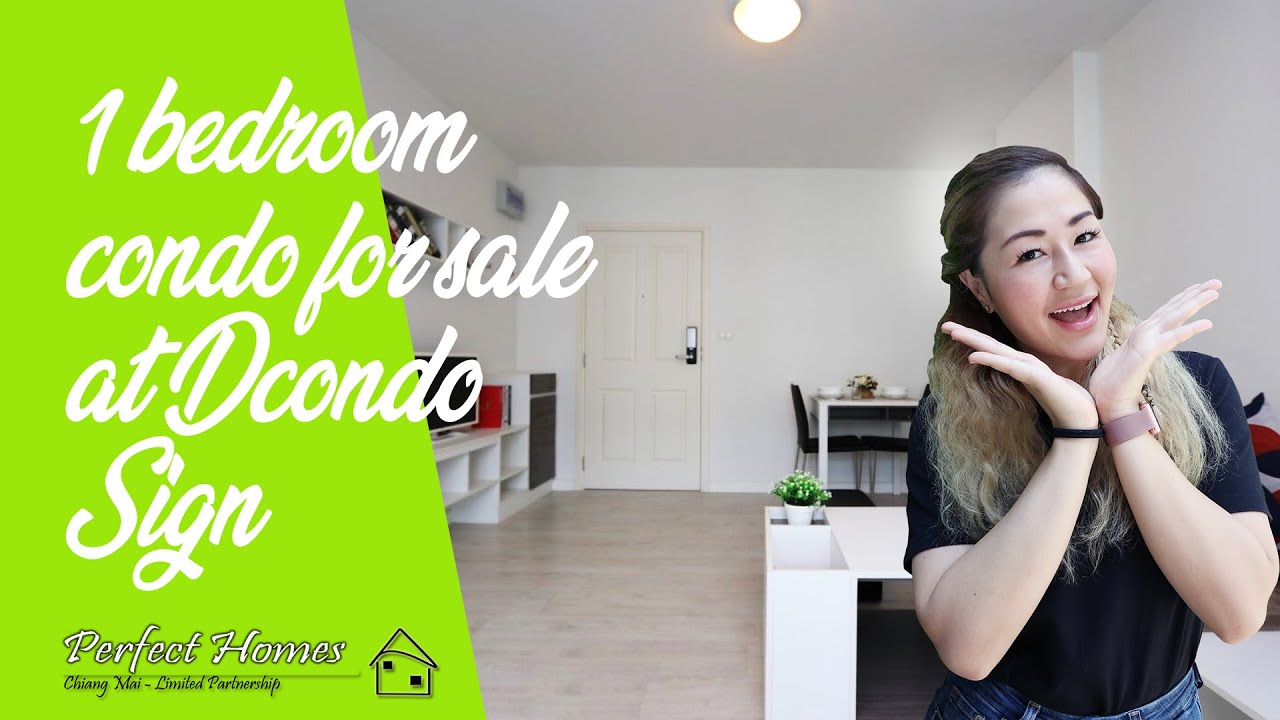