This is an Alert Currently Casa Till has many issues arising from the initial developer, so this condo is currently not available.

Featuring six separate condo buildings and 125 uber luxurious residential units overall. First revealed to the world in the latter part of 2013, condo units in buildings 1, 2, 3 and 6 of CASA TiLL are newly habitable while those of buildings 4 and 5 are structurally complete but waiting to be outfitted. Crafted in accordance with an environmentally friendly blueprint and bearing an anti-seismic skeleton sufficient to withstand even a major earthquake, CASA TiLL seamlessly unites modern architectural form and creature comforts with old-style Lanna [Northern Thai] panache to effortlessly render choice, carefree quality living in a resort atmosphere.

Buried down a small soi [side street] more or less untouched by pedestrian or motorised traffic and all but veiled behind a stand of tall trees, the high-privacy low-rise CASA TiLL complex lies on six rai (roughly one hectare) of land just off the Nong Hor thoroughfare. So within the shortest of distances on foot is the event-rich Chiang Mai International Exhibition and Convention Centre (CMECC) and, hugging the opposite side of the Rural Road, a more than satisfactory assortment of shophouse restaurants and cafés such as Teak Table Coffee & Eatery for savoury domestic eats and drinks. To stock up on an already sizeable and ever-growing pick of freshly baked goods and other delish rustic produce, occupants need only make for the rightfully popular Nana Bakery’s ‘Jungle Market’ held on Saturday mornings in the nearby wooded moo baan[housing estate] of Suan Pailom [‘Bamboo Garden’]. Beyond, the leafy lanes of the Chang Khian suburb with its dynamic but down-to-earth farmers’ markets and student hangouts before emerging on Huay Kaew Road and the northern perimeter of Chiang Mai University’s main (Suan Sak) campus.

Highly covetable in its geographic position far from the madding crowd with the sylvan slopes of the mountainous Doi Suthep-Pui National Park as an attention-grabbing backdrop, CASA TiLL is nevertheless nestled only moments away from the Khlong Chonprathan[Canal Road] section of Chiang Mai’s Outer Ring Road for swift access to destinations downtown and elsewhere. Ardent sports junkies in particular will be thrilled to know that the 700 Year Stadium in neighbouring Mae Rim district can be driven in little more than five minutes from the condo; built not only to mark seven centuries since the Rose of the North was founded but also as a venue for the 1995 Southeast Asian Games, the multi-purpose complex (at the rear of which is the pretty Navamin lake) lays claim to an Olympic sized swimming pool, two gyms, ice skating shows, table tennis tables, a golf course, a shooting range, aerobic dance and martial arts classes, a running track, a football field, a velodrome for bike racing plus badminton, basketball, tennis and volleyball courts. For several lifetimes’ worth of retail, entertainment and dining haunts, on the other hand, the perennially modish Nimmanhaemin Road is within comparable reach of CASA TiLL. And in scarcely more than a quarter of an hour, the timeless grace of the ‘Old City’ or else the largest shopping mall in the whole of the region, CentralFestival.

Apart from its hidden away location as the first line of defence, a locked electric sliding gate at the sole entryway to CASA TiLL remains under the strict control of a security guard ensconced 24 hours a day in the adjoining hut. Mounted there and indeed throughout all other common areas of the development are CCTV video cameras and, even after gaining admission to the grounds, an electronic keycard system is in operation to access the inside of the condominium.

Ringing the premises on three sides, a more than ample capacity of uncovered vehicular parking bays and, in condo building 1, the designated juristic person is available from 8AM to 5PM every day except Sunday in the office behind the cosily proportioned but functional central lobby. Complimentary shared WiFi is provided right through the property though residents can always requisition their own installation of in-room home broadband through the Internet Service Provider 3BB.

Whether to simply stay healthy or help keep in shape, condo building 2 incorporates a spacious fitness room kitted out with a spectrum of virtually unused, up-to-the-minute exercise paraphernalia. Each accommodating a single passenger lift [elevator], CASA TiLL’s collection of condo buildings sit arranged around a gardened courtyard landscaped by Bangkok-based Cancu Studio and bursting with lush tropical flora – a sublimely serene spot from which to kick back in fine fashion. In the midst of the quad, an open-air saltwater swimming pool with bordering sun terrace; the second pool is mostly finished and like the planned communal lounge-cum-bar in condo building 5, expected to be up and running in the next two or three months.

Not often encountered in Chiang Mai condos, each of the half-dozen 4-storey residential buildings of CASA TiLL boasts outer single-loaded airy walkways as well as double-wall construction to effectively insulate against any noise from the surrounding units. At least 20% larger than the city average for their type, 1 bedroom, 1 bathroom units are supplied in 48 and 55 sq m whereas 2 bed, 2 bath room offer twice the amount of useable space at 96 and 103 sq m.

Of those units which are currently move-in-ready, all come entirely furnished and air-conditioned in full with a digital door lock as an additional safety measure, an extra wide wood-panelled balcony (facing inwards) not to mention a fully fitted and equipped western kitchen which, by means of sliding glass doors, can be closed off from the combined living and dining quarters.

Are you staying at CASA TiLL right now or lived there previously? If so, we’d be only too delighted to get your views about the place so feel free to add a comment underneath!

*** Please note – Perfect Homes Chiang Mai has no connection with the developer of CASA Till Condo and is only offering privately owned rental units in this building.

Check out the Casa Till's location!

Have a look at our walk through video at Casa Till condo. 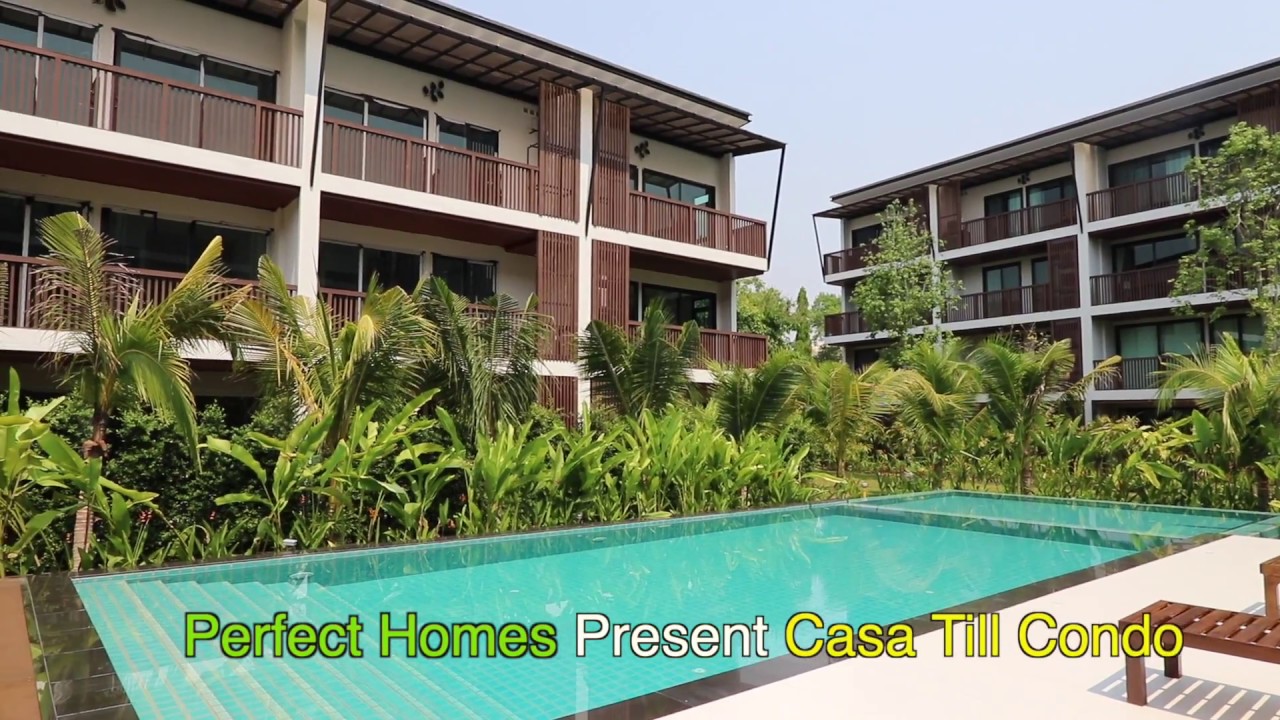 Have a look at our video at Casa Till Condo