Baan Wang Tan touted back in the day as ‘your home in a far eastern paradise’!

Quite apart from the thousands of stand-alone houses and town homes throughout metropolitan Chiang Mai, there are literally hundreds upon hundreds of gated estates. So when in the market for a landed property or perhaps an unimproved lot to DIY that dream pad, exactly which moo baan is the all-important question! Well, if it were a popularity contest, not many of the Northern capital’s housing projects can hold a candle to Baan Wang Tan.

Opened in the mid-nineties and especially well suited to families and retirees, Ban Wang Tan’s become a darling choice with local Thai folk and foreign expats the same. Thanks in a big way to its attractively laid out and commendably maintenanced mature park-like grounds, amiable work force and, divided up into a handful of residential zones, ready-built houses as well as ready-to-build acreage on 10 to 12 metre wide tree-lined streets.

On the scout for pleasantly leafy, near-silent & city-close WHEREABOUTS, by any chance?

Located in neighbouring Hang Dong, Baan Wang Tan lies almost entirely within the tambon [subdistrict] of San Phak Wan. Now just to forewarn that, as all but the only distraction from the moo baan’s natural chorus of birds chirping, insects humming and frogs ribbiting, portions of which do sit under the flight path of planes coming into approach at (or occasionally taking off from) Chiang Mai Airport!

Otherwise, Baan Wang Tan’s 1000 rai (160 hectares) are completely surrounded by –but distanced from- the Chiang Mai-Hod Road [Highway 108] to the west, the 700thAnniversary Road [Highway 3029] to the north, the Outer Ring Road [Highway 121] to the south and the Ping riverside 4032 Rural Road to the east. Making it commandingly placed just a short drive from whichever of the district’s seven international schools, Kad Farang boutique lifestyle mall, Doi Suthep-Pui and Ob Khan National Parks, not to mention Chiang Mai’s vibrant municipal scene.

Although more for appearances, Ban Wangtan does provide a continual security presence with guards at reach of the western main entry gate and the two secondary ways in/out or else doing the rounds patrolling the estate. For extra safety’s sake, closed-circuit TV cameras are widely installed about the moo baan.

Centred on the northern side of the site is the community office and laid on nearby for the fitness-minded,a couple of outdoor tennis hard courts with a club house building right next door; on top of featuring a smallish library corner, gymnasium and ping pong table, the aerobics room doubles as the dojo [training facility] of Wado Kai Karate Shiramizu Syuyoukai Chiang Mai with free practice sessions on Saturday mornings for anyone from have-a-go self-defencers to black-belted martial artists!

Then across the way (for a nominal charge), what better after a feverish work-out than a cooling dip in the Olympically sized open-air pool. While edging the largest of Banwangtan’s four lakes is the independently run Phufinn In The Lake café/restaurant/bar; with fairly priced domestic mains and sweet courses on offer, residents can snag a sofa on the timbered deck or stretch out on one of the overwater cargo net hammocks to the sound, most evenings, of acoustic soft jazz and easy-listening numbers from the sixties to eighties!

Pick and choose from all manner of LAND & HOUSE TYPES!

First up among Baan Wang Tan’s inventory of real estate options are buyable parcels of land measuring up to 630 talang wah(2520 square metres). With something of a construction boom happening lately around lakeside parts of the moo baan, new homes can be fashioned either self-sufficiently or by contracting out to the developer’s own band of architects, interior designers and engineering specialists.

Giving rise, over the years, to an eclectic jumble of custom-made houses with everything, inside and out, from modern takes on traditional Lanna to ultra contemporary. Not forgetting the several different styles of classically inspired but more cookie-cutterunits available from the developer.

All told, the moo baan counts 500 plus single to half-a-dozen bedroomed detached bungalows and twin-storey villas. Set on private plots of anywhere between 15 and 1500 talang wah(60 to 6000 sq m) with liveable space from 62 sq m to upwards of ten times that, some figure individual maid’s quarters, private swimming pool and one even benefits from a separate annexe for guests! 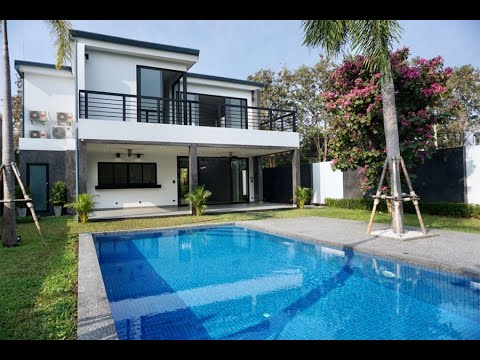 Whether you’re looking at condominiums for sale or looking to rent a condominium in Chiang Mai, then D’Vieng Santitham is a great place to start. Sansiri was founded more than three decades ago and is widely regarded as Thailand’s leading property developer. The Sansiri name …

Perfect Homes are proud to present another offering from Thailand’s foremost real estate developer Sansiri. Building on the success of their previous project Dcondo Campus …

This Chiang Mai map is part of Perfect Homes Chiang Mai‘s plan to make finding your perfect condo in Chiang Mai even easier.!  Zoom in on …

Looking for a condo with that little bit extra? If so, then check out this exceptionally well furnished one bedroom condo at Dcondo NIM that …

Spacious 1 bed condo to rent at The Treasure

An attractive, fully furnished and equipped one bedroom condo to rent at the popular Hillside 4 Condominium on Huay Kaew Road near Nimmanhaemin Road . …